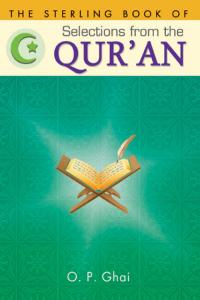 The Sterling Book of: Selections from the QUR'AN

The Qur’an is one of the most widely read books in the world. For more than fourteen hundred years the Qur’an has remained one of the major sources of inspiration for a good life for millions across the seven continents.

The Selections from the Qur ’an rendered by Mr. Ghai into clear intelligible English, is a bold and creative attempt to bring to the attention of the common people, the essence and wide range of the teachings of the Qur’an.

It would undoubtedly be a source of knowledge, enlightenment and inspiration. It would promote a better understanding of Islam and of the message that Muhammad conveyed to all mankind - Rasheeduddin Khan

To the ever-growing number of English-speaking readers looking for a volume which will tell them the essential message of the Qur’an in one sitting, I cannot commend a book as readily as the present one. - S. A. Ali, former Director ,Institute of Islamic Studies, Hamdard University

About the Author :
O. P. Ghai (1919-1992) was known for his communication skills. A publisher by profession and believer by faith in the fundamental unity underlying the great religions of the world, he sought religious co-existence through the writteen and the spoken word by editinng a treatise, Unity in Diversity, which became a widely translated book in India and abroad.

A graduate of Punjab University, Lahore, who started his career as a school teacher, founded University Publishers, Sterling Publishers and the Institute of Book Publishing and rose to become a member of the Executive Committee of the International Publishers Association, a rare honour.