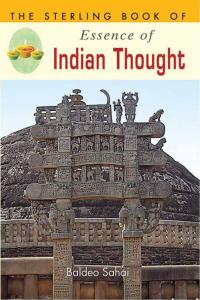 The Sterling Book of Essence of Indian Thought

Essence of Indian Thought is about the contribution of India to the thoughts, cultures and traditions of the world. The debt owed by the west to other civilisations and to India in particular, goes back to the earliest epoch of the ‘Western’ scientific tradition, the age of the classical Greeks and continued up until the dawn of the modern era, the renaissance when Europe was awakening from its Dark Ages.

This book is an humble attempt to put together some of the aspects of India’s contribution to the thoughts of the world. Upanishads and Yoga both speak of universal values and constitute the heritage of all peoples. Other
subjects like Ayurveda, Kamasutra and various forms of Indian arts-painting, music and dance have been analysed and discussed elaborately. The book draws attention to the Indian art of storytelling, the origin of mathematics, including the zero and decimal system.

Baldeo Sahai was born on 7 April, 1918 at Jhunjhunu (Rajasthan) in a highly religious family. He was taught the Gita by his grandfather at the age of 12. Since 18 years of age he has been associated with saints of RamaKrishna Mission and Sivananda Ashram. He was selected for Indian Foreign Service(B) and Indian Information Service. He opted for the latter and superannuated in 1976.

Was Communication Consultant to Standing Conference Of Public Enterprises, many private and public sector organisations for two decades. He was music critic of the Hindustan Times for 12 years and art critic of the Illustrated Weekly of India for eight years. He has authored many books. Of these Indian Shipping-A Historical Survey and Active at Eight are extremely popular. A Fellow of Indian National Science Academy he was conferred a Doctorate in History by a University of the Netherlands. He founded the Upanishad Society and has written pocket books on all principal Upanishads.