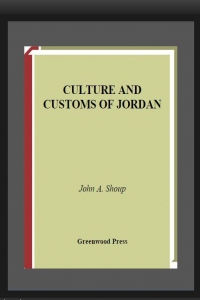 CULTURE AND CUSTOMS OF JORDAN

Most people in Europe and North America are not very familiar with Jordan,
a small country located between its larger, better known neighbors Egypt,
Syria, Iraq, Israel/Palestine, and Saudi Arabia. If they do know something
about it, it is often because of T. E. Lawrence, Lawrence of Arabia, whose
exploits with the Bedouin during World War I have helped perpetuate the
romantic images of robed Bedouin riding camels and dramatic desert landscapes.
Others may be aware of Jordan because it has been a frontline Arab
state in the long struggle between the Palestinians and Israelis. Still others
may be aware of the country because it is mentioned in both the Old and
New Testaments. In reality Jordan is all of these images; it is where a number
of important battles did take place between the Bedouin forces of the Arab
Revolt led by Lawrence as well as their tribal shaykhs and the Turks during
World War I; it is one of the major frontline states with Israel starting even
before Israel declared itself a state in 1948; and it does contain a large number
of sites associated with both the Old and New Testaments, but it is much
more.
Jordan was created out of the marginal areas of several older historical
administrative districts after the collapse of the Ottoman Empire at the end
of World War I. When its borders were drawn up in Cairo in 1920 and
named the Emirate of the Transjordan, it was a poor, thinly populated country
with settled agriculturalists hugging the better watered western spine and
the rest was the home of nomadic pastoralists. Since gaining its full independence
in 1946 the Hashemite Kingdom of Jordan has been able to create a
strong sense of identity based on Bedouin culture among its people. It has
emerged since the mid 1970s as a major business and banking center for the

Middle East with one of the best educated populations in the region, if not
the world.
Proud of their Bedouin heritage, Jordanians are hospitable and generous.
In fact, their hospitality is constantly evoked in the common greeting ahlayn
wa sahlayn, “you are twice welcome.” Jordanians use the phrase not only
to say “hello,” but also to say “you’re welcome,” “goodbye,” and numerous
other uses. Also frequently heard is marhabtayn, which again means “twice
welcome.” In fact, Jordan is called the Land of Ahlan wa Sahlan, the Land of
Welcome, both by its own people and other Arabs in the Middle East. Jordan
remains the Land of Welcome where traditional Arab hospitality is always
given to the stranger with no questions asked as well as an island of peace and
stability despite the confl icts the rend much of the region.