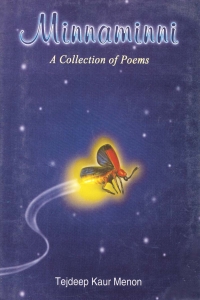 Minnaminni: A Collection of Poems

"Tejdeep Kaur Menons voyage from her first collection of poems Caught in a Stampede through Five Feet Six and a Half Inches has brought her to Minnaminni (The Firefly), that shows her as a poet par excellence skilled in craft and mature in perception. But what distinguishes her from many other contemporary women poets is her transparency of emotions that lends to each poem credibility and force. There is no artifice anywhere because each theme flows involuntarily from a reservoir of authentic experience.

The poignant sensibility that comes through her poems is impressive. Almost unbelievable of an IPS Officer. Her transparency of expression is indeed disarming.
- The Journal of the poetry Society of India

Policing provokes the poet in this woman cop.
-The Times of India

A fine example of the liberated woman.
-The Hindu

The ability to structure experience in an evocative and appealing manner is a talent Tejdeep has to a remarkable degree.
-The Indian Express

The most moving poems are those about the predicament of being a woman and wife in a gender-based society.
-The Telegraph

Browing on the Beat.
-The Statesman

Poetry and policing go hand in hand for this lady.
-The Statesman

Creativity of an unusual kind.
-The Deccan Chronicle

Laced with the sensitivity of a woman and sharpened by the observant eye of the poet.
-The Sunday.

In the glimpses of conflict which abound in the poetry of Tejdeep. One may read recognition as a crucial stage because in it lies the germ of resolution which. In other words, is altering or widening the existent level of conciousness.
-Trends and Techniques in Contemporary Indian English Poetry edited by Rama Nair, Prestige Books, New Delhi

Deflating deeply, agonisingly felt emotion with deliberately puerile image and dictum, is a sophisticated game that is as startling as rare in a first attempt.
-Indian English Poetry: Critical Perspectives edited by Jaydipsinh K.Dodiya. Sarup and Sons, New Delhi"