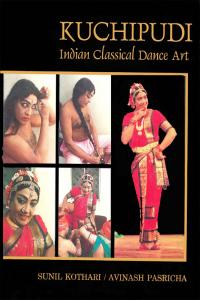 One of the seven major classical dance forms of India, Kuchipudi in its solo avatara has acquired a status of a classical dance form of Andhra Pradesh. The story of Kuchipudi from its origin as a dance-drama and its emergence as a solo dance form is one of the most fascinating phenomena engaging attention of the gurus, the performing dancers and the research scholars.

Essentially a preserve of the male dancers, who also excelled in the female roles, today Kuchipudi is being mainly performed by the female dancers. However, the tradition continues to survive in Kuchipudi village, some 30 kilometres away from Vijayawada in Andhra Pradesh. The traditional dance-dramas continue to exist along with more popular solo dance form. Kuchipudi has innumerable votaries not only in India but also abroad and their number is ever increasing. Padma Shri Dr. Sunil Kothari, dance historian, scholar and critic, traces in this volume the origins of the dance-drama tradition, correlating the prayoga, the practice and the shastra, the theory and how from the natya, the drama, its integral elements nritya, expressional dance and nritta, the pure dance in the hands of creative, traditional gurus have shaped its present solo format, giving it its own identity.

Based on his extensive field work Dr. Kothari has studied the allied forms like Vithi Bhagavatam, Turpubani Vidhi Natakam, Pagati Vesham, Navajanardana Parijatam, Bhagavata Mela Nataka, Kuravanji dance- Idrama and offered an overview of the dance form as it exists today and continues to develop in its many ramifications. He has also dwelt upon the all-pervading influence of Vempati Chinna Satyam and his contibution in sh"dJ'ing Kuchipudi into a solo form along with the dance-dramas that he has choreographed.

The brief biographies of the traditional gurus and some of the celebrated exponents I add tp the value of this volume, presenting the current state of Kuchipudi on the contemporary dance scene.

Profusely illustrated with 166 colour and 221 black and white photographs by the ace photographer A vinash Pasricha and designed by the eminent artist and designer Dashrath Patel, Kuchipudi is a major significant study of the classical d'ance form of Andhra Pradesh.