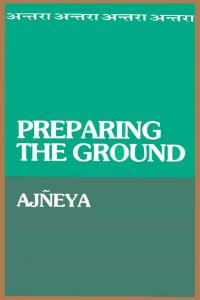 PREPARING THE GROUND is a second collection of ‘Leaves from an Undated Diary’, which appeared in Hindi under the title ANTRA in 1975. The first collection, BHAVANTI in Hindi (1971), was published in translation as TRUCULENT CLAY in 1982. Neither a compilation of impromptu jottings from a writer’s field-book, nor a diary recording day to day events in a writer’s life, nor studied epigrammatic utterances, nor again a collection of miniature personal essays, both BHAVANTI and ANTRA sought to be all these and yet more : an attempt to present an integrated vision of the writer’s struggle with his medium, defined in the widest sense as including the tools of his craft, his literary, social, spiritual environment, his interaction with his contemporaries and with their pet ideas. What the author was attempting to do in these series of what he ahs variously described as ‘inscapes’, ‘interior events’, ‘inward journeys’ and ‘dateless journals’ was to present, in an apparently loosely strung yet integrated form, the writer’s world, both as subjectively experienced and as objectively viewed and evaluated but to present these processes in their simultaneity and immediacy.

The books, though their first reception was subdued and even somewhat bewildered, have risen steadily both in critical estimation and in popular regard. Well read and often quoted, they have also taken their place as classics of their kind, even though the author continues to be a focus of controversy as he has been for four decades.

PREPARING THE GROUND is a translation by Manas Mukur Das (with revisions by the Author) of the second volume of the ‘dateless journals’- ANTRA. As in the case of the first series, a number of entries have had to be omitted on account of their untranslatability verses lampooning the author’s contemporaries and their foibles, witticisms based on current Hindi usage, etc. But what remains is still an authentic and representative translation. For readers who do not have access to Hindi, PREPARING THE GROUND will provide an exhilarating view not only of the author’s mind but also of the contemporary literary scene in India.