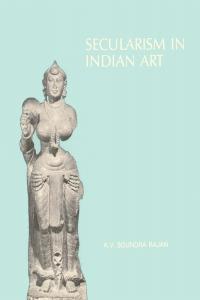 This book is directed towards inquiring into the definition of the scope of secularism in a holistic way, in so far as it could apply to ancient Indian creative art, often labelled as religious art.  It is, however, seen that this art often shows in its composition, partly or wholly, a deliberate unrelatedness to its immediate locus, and conveys the mind of the artist, his absorption of the aesthetic and literary, traditional, mystic and the rasa-charged pulsating life-stream legacy, and display of macro-cosmic temper, supra-regional commonality and norm-building penchant, in his eventual creations.  Religion can produce profound thought, but not art which, through the medium of religion, shows insight and the impacts of secular experience.  Examining by a sampling the entire range of art, sectorally and chronologically, to detect the secular manifestations embedded in the art presentations, the author finds that there is an integrated secularism in the art of India’s past, invoked by the artists who had been groomed in its culture and who had developed a macro-perception, by the totality of the impacts of the Dharmasastras, Arthasastras, Kamasastras, and Natyasastras, along with the hieratic works and the fertility cults and mystic deity-devotee links, analogous to mundane romantic attachment, and the ancient artist who owned all this as a private legacy, had evolved his own techniques for formal creations of them in art.  Illustrated with sixty-four plates and line drawings, besides Notes on Plates and Appendices, the eight chapters of the book dissect the processes behind art creations, to reveal humanism and secularism.