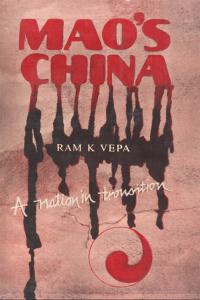 Mao's China - A Nation in Transition

The author has also tried to probe into the patterns of socialisation that have gone into the making of the political mind of the legislators in the state. The study brings out that till the IV assembly at least national movement had been one of the most important socialising agents, though some departures from this trend have also been noticeable, which have a portent for the future.

Altogether the prsent study, which is a revised version of authbor's Ph.D. thesis, provides meaningful insights into the structure of the political elite and the political process in the state. It should serve as a useful basis for future studies particularly for comparative purposes.

PART I: HERE AND THERE IN CHINA
1. Cross Over to Red China
2. On to Nanking
3. Into the Countryside
4. Shanghai—China’s Metropolis
5. Peking—the Once Forbidden City