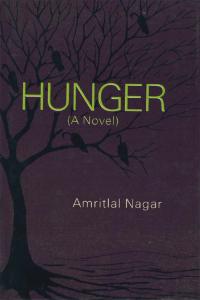 Amritlal Nagar, considered the doyen among Hindi novelists today, wrote Bhookh (Hunger) way back in 1946, provoked by the war time famine in pre-partition Bengal. Since then, it has been hailed by readers and critics alike as a modern classic of Hindi literature.

The novel is centred round Panchu Gopal Mukherjee, the headmaster of a village school, which he himself had built and maintained. It is through the eyes, feelings, thoughts and memories of Mukherjee that the horrors of the great famine are delineated. The village is getting slowly deserted with the living skeletons slowly migrating in all directions and slowly dying on the roadside. Hunger is ravishing the land with predatory birds and animals gorging on dead bodies. Yet the local zamindar and the leading trader are least affected. In fact, they are thriving, helping the war effort and co-operating with local authorities.

Mukherjee himself is reduced to penury, wondering whether to sell off the few ornaments left in the house or the furniture of his beloved school. He sees all round unbearable sights his brother misbehaving with his own wife, the carpenter’s widow selling her body, the zamindar revelling in drinks, a food riot being quenched by the police, the trader arranging a feast for Brahmins to wipe out his sins and the hungry fighting with dogs and scraping the food from the discarded banana leaves. The novel, yet, ends with hope, when Mukherjee picks up a newly delivered child, whose mother has fallen dead and the life force had ejected the child out of the womb. He wrenches the umbilical cord and takes the child home, where his family members are dead or dispersed. Only his starving wide-eyed wife Mangala is there intrigued but happy by the new arrival.