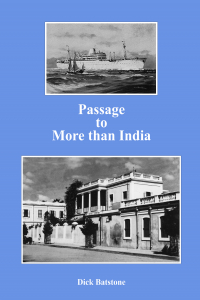 Passage to More than India

This book is a voyage of discovery. In 1959 the author, Dick Batstone, a classically educated bookseller with a Christian background, comes across a life of the great Indian polymath Sri Aurobindo, though a series of apparently fortuitous circumstances. A meeting in Durham, England, leads him to a determination to get to the Sri Aurobindo Ashram in Pondicherry, a former French territory south of Madras...

Compared with Gandhi and Tagore, Sri Aurobindo is little known in the West. For many in India Sri Aurobindo is a more significant figure, as the great patriot, pioneer yogi and philosopher of the evolution of consciousness and of the future of humanity.

So I originally wanted to find an English or American publisher. In this I was unsuccessful as the book seemed not to be 'suitable' for their lists, being neither a travelogue nor a book about religion.

Now, at last, it is being brought out in Auroville, the international community founded by the Mother in 1968 and which I have visited many times since its inauguration. Why was it not published here before? Because I wanted to reach a Western audience rather than 'preaching to the converted', but have now seen how truly international Auroville has become and that its diaspora reaches further and to a wider diversity of people than a Western publisher would. I am delighted my friends here wish to produce it.