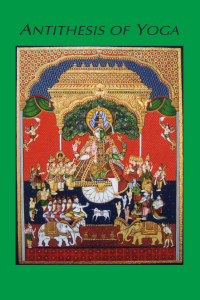 Antithesis of Yoga is a nonfictional novel of the first 25 years of wonderful and terrible life in the City of the Future, written by Jocelyn. Auroville, The City Earth Needs, near Pondicherry India, is a global spiritual township started by The Mother in 1968. For those interested in learning about the history of Auroville, and would like to meet the fascinating people and hear the often amazing stories of the beginnings of this Utopian experiment they can find here a first hand account of the tumultuous years of Auroville's early development.

Roslyn, an American hippie single mother, had imagined she had had a vision calling her to India. She travelled to Pondicherry overland across Europe and Asia, not knowing her destination was Pondicherry. She arrived with her eight month old daughter Bliss in August 1969. She thought she had found Shangri la. Pondicherry was nothing like anywhere she had been. It sparkled.

She soon met many interesting, exotic people, John Kelly, a New York City fireman who had had visions of Mother and Sri Aurobindo in the trenches in WWII; and Ananta. a Boston Brahmin sadhu who had built a temple to Zeus on the island Mother had given him; the Countess de B, a hero of the French Resistance; the tantric guru, Panditji; and many others. But Roslyn was completely captivated by The Mother and Her vision and ideals for Auroville.

Roslyn's first glimpse of Auroville was a red eroded plain, pockmarked with impoverished villages. There was not a tree to be seen. There was no electricity in the area. There was 100% illiteracy among the villagers. But that was not what Roslyn saw. She saw a place where a utopia would be built by sun eyed children of a new dawn.

There were many adventures, misadventures and challenges along the way.

This book tells some of the story of the great adventure of the beginning of the town. Auroville today is a town in South India visited by VIP's, students and people from all over the world, the home of people from more than 30 countries, the winner of a Green Oscar, the site of the Matrimandir, and has applied for World Heritage status. It is a successful experiment in developing a spiritual global community.