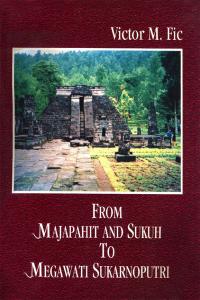 From Majapahit and Sukuh To Megawati Sukarnoputri

The central thesis of this book maintains that the need to preserve pluralism in Indonesia, and the high price paid by its people anytime pluralism had been trampled upon in the past, are the two essential aspects of their historical experience. This thesis is particularly relevant for the people of Indonesia today as they are grappling with the problems of national unity and transition to a modem pluralistic democracy. Two parts of this book articulate this thesis.

Part I explains the origin of the Hindu-Buddhist dualism during the Srivijaya and Sailendra periods in the VIII- IX centuries AD. The process of Javanization then extended this dualism by incorporating into the new synthesis the indigenous ancestral and the Rsi cults during the Majapahit period, particularly under King WurukI'ls rule from 1350 to 1389. This new pluralism was further extended by absorbing elements of the Kalang/palang culture and the Bhima cult, culminating in the grand synthesis of the core values of the Hindu-Javanese culture as expressed by the iconography of Candi Sukuh erected in 1437. Two factors are identified as contributing to the decline and then demise of Majapahit in 1527. First, attempts by China to build its own system of dependencies in Southeast Asia by detaching from Majapahit its overseas territories, and then its intervention in the dynastic rivalries in Java during the Paregreg civil war from 1400 to 1406. Second, the penetration of Islam from the coastal areas of Majapahit into its heartland, and the gradual establishment of its hegemony over the core values of the Hindu-Javanese civilization.

Part II of the book explores the interaction of Islam with the deeply rooted substratum of the Hindu-Javanese values, and then the absorption of Islam into a new synthesis and a higher form of pluralism forged during the long process of the Islamization of Java and the Javanization of Islam. This new pluralism was further enriched by incorporating various strands of Christianity during the colonial period. In its fmal form this pluralism provided the social cohesion and the national ethos and consciousness which propelled Indonesia towards its statehood and independence in 1945, leading to the establish- ment of a secular state to accommodate the imperatives of this higher pluralism under the state doctrine of the Pancasila.

The book then surveys the post-independence period to show how this pluralism fared under the successive regimes of Sukamo, Suharto, Habibie, Abdurrahman Wahid, and how it fares under Megawati Sukamoputri today. The survey con- cludes on a sobering note that most of the problems experi- enced by these regimes had their roots in the violation of the pluralistic nature of the Indonesian society. In this context there is little doubt that the continued attempts of some Islamic groups, mostly incited from abroad, to wage a jihad for the replacement of the existing secular state by an Islamic one, would plunge the country into a civil war of the Paregreg type. These attempts might not succeed given the rnilitaryns staunch commitment to the Pancasila and the secular state. However the cost of thwarting them would be very high.

Foreword by Lokesh Chandra
Preface
List of Maps and Plates

CHAPTER II
THE SIGNIFICANCE OF SUKUH
(Political, Doctrinal and Ritualistic Significance)
The Crisis of the Majapahit Empire
Sukuhís Cosmological Challenge to Majapahit
Bhagawan Ganggasudhi Consecrates the Linga in 1440

CHAPTER III
THE CENTRAL MESSAGE OF SUKUH
The Cosmic Cycle of Life, Death and Rebirth
The Dual Role of the Tirtha Amrta: Rituals of Death and Fertility
The Bhima Fertility Cult: Ritualized Non-erotic Sex
The Kalang/Palang Fertility Cult: Secular Eroticism