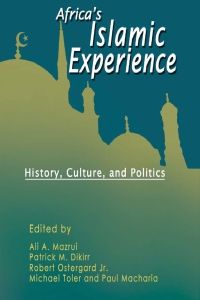 This volume is rich in historic surprises about the fortunes of Islam in African experience, Islam first arrived in African while the Prophet Muhammad, the Founder of the religion, was still alive, Ethiopia provided asylum to early Arab Muslims on the run from persecution by fellow Arabs in pre-Islamic Mecca, Today Nigeria has more Muslims than any Arab country, including Egypt.

This volume explores not just Islam's impact upon Africa but also Africa's impact on Muslim history. The book explores the geographical expansion of the religion, the revival of ancient Muslim rituals, and the politicization and radicalization of Islam in both colonial and pre-colonial Africa.

Is Islam compatible with democracy? Can African Islam peacefully coexist with Christianity? How has Islam in Africa influenced architecture, Literature, race relations, gender relation, and cultural interpenetrations between Arabs and Black Africans? In this era of globalization is Islam a positive vanguard force or a trigger for parochialism and backward-looking nostalgia? In this era of terrorism and counter-terrorism can Islam be mobilized as a force for stability or has the religion been irretrievably hijacked by its own worst radicals?

This volume does not try to answer all the questions, but it helps to lay the basic groundwork for understanding Islam much better in this new age.

Professor Ali Alamin Mazrui, Albert Schweitzer Chair and Director of the Institute of Global Cultural Studies at Binghamton University, State University of New York. He is honored in every corner of the world for his astute scholarship on especially but not only, in the fields of International Relations and Comparative Politics. Prof. Mazrui has published more than 20 book and over 100 journal entries, including his two most recently published book - Islam: Between Globalization and Counterterrorism (2006) and A Table of Two Africans: Nigeria and South Africa as Contrasting Visions (2006).

Patrick Maison Dikirr is a Research Fellow at the Institute of Global Cultural Studies, Binghamton University, State University of New York. Dikirr's most recent, co authored article, Between the Sacred and the Secular: Indigenous Intellectual Property, International Markets, and the Modern African State is published in the Journal of Modern African Studies.

Rober L. Ostergard, Jr. is an Assistant Professor of Political Science at the University of Nevada, Reno. Ostergard currently serves as series co-editor of the Ashgate book series, Global Health.

Michael Toler is the program director of the Al-Musharaka Initiative in Arab, Islamic, and Middle Eastern Cultures of the National Institute for Technology and Liberal Education (NITLE) and editor of the Arab Culture and Civilization Online Resource of the Initiative. He is an active translator of North African Literature from French and Arabic into English.

Paul K. Macharia is currently a PhD candidate in the Political Science Department at Binghamton University. His primary area of training and research is in the field of International Relations, focusing particularly on inter-and intra-state conflict and foreign policy.