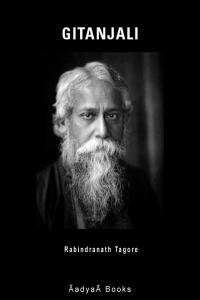 A few days ago I said to a distinguished Bengali doctor of medicine, 'I know no German, yet if a translation of a German poet had moved me, I would go to the British Museum and find books in English that would tell me something of his life, and of the history of his thought.  But though these prose translations from Rabindranath Tagore have stirred my blood as nothing has for years, I shall not know anything of his life, and of the movements of thought that have made them possible, if some Indian traveller will not tell me.'  It seemed to him natural that I should be moved, for he said, 'I read Rabindranath every day, to read one line of his is to forget all the troubles of the world.' I said, 'An Englishman living in London in the reign of Richard the Second had he been shown translations from Petrarch or from Dante, would have found no books to answer his questions, but would have questioned some Florentine banker or Lombard merchant
as I question you.  For all I know, so abundant and simple is this poetry, the new renaissance has been born in your country and I shall never know of it except by hearsay.'  He answered, 'We have other poets, but none that are his equal; we call this the epoch of Rabindranath.  No poet seems to me as famous in Europe as he is among us.  He is as great in music as in poetry, and his songs are sung from the west of India into Burma wherever Bengali is spoken.  He was already famous at nineteen when he wrote his first novel; and plays when he was but little older, are still played in Calcutta.  I so much admire the completeness of his life; when he was very young he wrote much of natural objects, he would sit all day in his garden; from his  twenty-fifth year or so to his thirty-fifth perhaps, when he had a great sorrow, he wrote the most beautiful love poetry in our language'; and then he said with deep emotion, 'words can never express what I owed at seventeen to his love poetry.  After that his art grew deeper, it became religious and philosophical; all the
inspiration of mankind are in his hymns.  He is the first among our saints who has not refused to live, but has spoken out of Life itself, and that is why we give him our love.'  I may have changed his well-chosen words in my memory but not his thought. 'A little while ago he was to read divine service in one of our churches--we of the Brahma Samaj use your word 'church' in English--it was the largest in Calcutta and not only was it crowded, but the streets were all but impassable because of the people.' 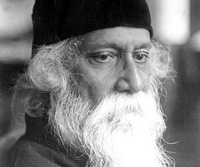 Rabindranath Tagore (1861-1941) was the youngest son of Debendranath Tagore, a leader of the Brahmo Samaj, which was a new religious sect in nineteenth-century Bengal and which attempted a revival of the ultimate monistic basis of Hinduism as laid down in the Upanishads. He was educated at home; and although at seventeen he was sent to England for formal schooling, he did not finish his studies there. In his mature years, in addition to his many-sided literary activities, he managed the family estates, a project which brought him into close touch with common humanity and increased his interest in social reforms. He also started an experimental school at Shantiniketan where he tried his Upanishadic ideals of education. From time to time he participated in the Indian nationalist movement, though in his own non-sentimental and visionary way; and Gandhi, the political father of modern India, was his devoted friend. Tagore was knighted by the ruling British Government in 1915, but within a few years he resigned the honour as a protest against British policies in India.

A Bengali mystic and artist, Rabindranath Tagore was a great poet, philosopher, music composer and a leader of Brahma Samaj, who took the India culture and tradition to the whole world and became a voice of the Indian heritage. Best known for his poems and short stories, Tagore largely contributed to the Bengali literature in the late 19th and early 20th century and created his masterpieces such as Ghare-Baire, Yogayog, Gitanjali, and Gitimalya. The author extended his contribution during the Indian Independence Movement and wrote songs and poems galvanizing the movement, though he never directly participated in it. He was awarded the Nobel Prize in literature in 1913 and became the Asia's first Nobel Laureate. Two famous songs composed by him Amar Shonar Bangala and Jana Gana Mana became a part of the national anthem of Bangladesh and India respectively after their independence. He was the only person to have written the national anthems of two countries. Aside from this, the greatest legacy of the poet to his country remains the world renowned institution he founded known as Visva-Bharati University.