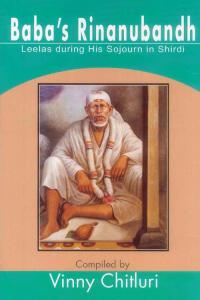 Baba's Rinanubandh: Leelas during His Sojourn in Shirdi

The word 'Rinanubandh' literally means 'Karmic debt'. It is an impossible task to write the exaxt meaning of this word, as a lot of nuances are lost while doing so. When you read the lives of Babs's devotees you realise that it has deeper meaning. A bond that has existed for many generations.

His devotees came from varied backgrounds. Some highly educated, others were rustic villagers. Some were young, while others were middle-aged and set in their ways. They went to Shirdi not knowing what to expect. Others went there by chance. But once they met Baba their lives were changed forever. And the 'Karmic bond" started unfolding. Thus they returned time and again to be with the living God who blessed them and gave them a handful of udi. In the years that followed, no matter what befell them they knew that Baba was always with them.

This book is a kaleidoscope of leelas, photographs and the lives of Baba's devotee. It will make the reading of Shri Sai Satcharita easier and fruitful.

Vinny Chitluri was born in Arvankadu (Nilgiris), but was educated in Jabalpur (Madhya Pradesh). She did her postgraduation in Pediatrics from Kalawati Saren Hospital, Delhi. Then she went to the US, passed the board examination and was conferred the ‘Diplomat of the American Academy of Pediatrics’. While in the US, she started thinking seriously about her Karmic bonds with her family. As her father worshipped Baba, she was also able to do the same from a very young age. She has been worshipping Baba for sixty years. Her relationship with Baba is that of a ‘best friend’ as He loves her no matter what she does.

She retired from the medical profession at the age of fifty and came to Shirdi in 1994 and settled there. Then she set about trying to know more about Baba. She soon realised that ‘the more she learned about Him, the more ignorant she was’. Alas! it would take her many lives to know a little about this inscrutable God. But her quest is ongoing.