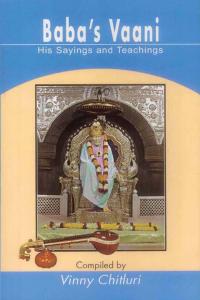 Baba's Vaani: His Sayings and Teachings

This book is a collection of the sayings and teachings of Baba, that are highlighted in the experiences of the devotees as they interacted with Him. Thriugh direct intervention in their lives, ans the use of parables, He led them to spiritual growth. Like the caring parent that He is, He used love and humour to help His devetees understand profound philosophical and spiritual ideas.

These ideas were expressed in simple language, and often seen in Practice in their ordinary day-to-day experiences, so that devotees were unaware that they were acquiring bodha paddhati. Bodha is instruction, or perception, and paddhati is protocol or steps of a ritual.

Vinny Chitluri was born in Arvankadu (Nilgiris), but was educated in Jabalpur (Madhya Pradesh). She did her postgraduation in Pediatrics from Kalawati Saren Hospital, Delhi. Then she went to the US, passed the board examination and was conferred the ‘Diplomat of the American Academy of Pediatrics’. While in the US, she started thinking seriously about her Karmic bonds with her family. As her father worshipped Baba, she was also able to do the same from a very young age. She has been worshipping Baba for sixty years. Her relationship with Baba is that of a ‘best friend’ as He loves her no matter what she does.

She retired from the medical profession at the age of fifty and came to Shirdi in 1994 and settled there. Then she set about trying to know more about Baba. She soon realised that ‘the more she learned about Him, the more ignorant she was’. Alas! it would take her many lives to know a little about this inscrutable God. But her quest is ongoing.