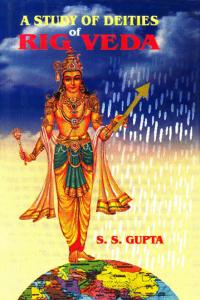 A Study of Deities of Rig Veda

This is probably for the first time that a serious study of Deities of Rig Veda has been made with the help of modern research methodology and science to find out what the Rishis had said, a few thousand years back, about the Deities. Efforts were also made to identify these gods. It is a finding of great importance that what Rishis had said about these gods is being corroborated by the western science today.
Dr. Gupta has grouped these 33 gods of Rig Veda in three categories: (i) Natural Phenomena Gods—Sky, Earth, Fire, Air and Water. All the material things are produced by their permutations and combinations. These five natural phenomena gods have their sub-gods also. For example, Agni has Surya Agni (Nuclear energy), Apan Napat Agni (Agni in the sky like lightning), Davanal (Agni on Earth), Badvanal (Agni in the oceans or water) and Jathragni (Agni in the body); (ii) Gods connected with soul energy such as Vishnu (can be compared with a modern generating station), Brahama, who induces the tiny, invisible, weightless particles of soul energy in all the living beings to give them life, Shiva, who, at an interval of time, takes out this particle of soul energy from all the living beings and they all become dead, and Yama, who and whose assistants take these tiny particles of soul to a place called Yama Loka; (iii) Craftsmen gods such as Vishvakarma, Tvastha and Ribhugan who assemble and mix the five basic elements in different proportions to create structures or forms so that soul-particles can be introduced in them; and (iv) Miscellaneous gods such as Rishis and other men, animals (cow, frog, etc.) raised to godhood, and other important things like meaning of prayer, does Rig Veda give history etc.