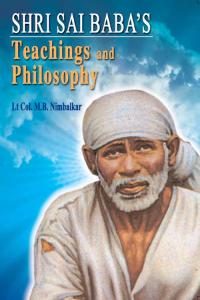 Capturing the essence of Sai's teachings, this book offers gems of wisdom that would enable one to lead a pious life devoted to the service of others.

Explaining the philosophy of Shirdi Sai Baba on concepts like wealth, Karma, Non-violence, Patience and the like, it teaches us how to conduct ourselves to make this life worth living.

Born in Baroda (Gujarat) on 29 October 1918, Lt Col. Mukundrao Balvantrao Nimbalkar (Retd) graduated with English and Marathi literature in 1939 and joined Baroda State Army as cadet officer. In 1949, he was enlisted in the Indian Army and served first in the Maratha Regiment and then in the Fourth Gorkha Rifles. He retired in 1968 as Lieutenant Colonel after 29 years of service.
A year before retirement, while recouping at the Naval Hospital at Bombay from a heart ailment, he chanced to read the Life of Sai Baba by N. V. Gunaji. On discharge from the hospital, he read the book once again, and on 3 August 1967, had a miraculous chance to touch and pay respects to the silver sandals of Sai Baba being taken from Shirdi to London. Since then his lifestyle underwent a total transformation.

Being well-versed in Sanskrit, he studied the Ramayana, the Mahabharata, the Gita, the Upanishad and the Vedas. He also studied the Marathi Jnaneshvari, Eknath Bhagavat, Tukaram Gatha and Das Bodh, all considered to be the four Vedas of Maharashtra. From 1980, he started contributing articles, in both Marathi and English, to Shri Sai Leela. In 1993, he published a profusely illustrated, voluminous book in Marathi Shri Sainche Satya Charitra, in prose form with detailed commentary and notes from the original Shri Sai Satcharita.