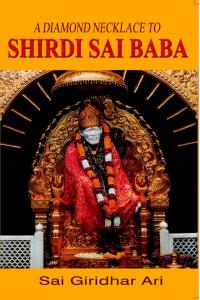 Chanting of Sri Sai Ashtothara, the 108 names of Shirdi Saibaba, is the most chosen and popular way of worshipping Baba. The Ashtothara was compiled, originally, by Pujya Sri Narasimha Swamiji, an ardent Sai devotee. Sai Ashtothara is chanted daily in Shirdi during Kakad (Morning) Arti. However, no attempt has been undertaken to make one relate these sacred names to the memorable miracles and leelas of his grace and protection. This is a prayer book and an attempt to explore the deeper inner significance of each name. Hopefully it will be helpful to every Sai devotee to win his grace and blessings.

Sai Giridhar Ari did B. Tech Electronics from JNTU Kakinada in Andhra Pradesh (AP) and M. Tech in Computer Science from Indian Statistical Institute, Calcutta, one of the reputed institutes in India. He worked in Bapatla Engineering College (AP) for nearly 5 years before leaving for USA in 1997. Since then, he has been working as a software professional.

His father, Sri Sambasiva Rao is an ardent devotee of Sai Baba and introduced Sai Baba to him. Thus he has been worshipping Sai Baba since his childhood days. He first visited Sai Baba’s Holy Abode, Shirdi in 1982 and after that Baba blessed him with several visits to His Holy Abode. Baba mysteriously inspired him to compile this work, in fact, the author is just an instrument in the hands of Baba in accomplishing this work. He is living in Northern Virginia, close to Washington DC.