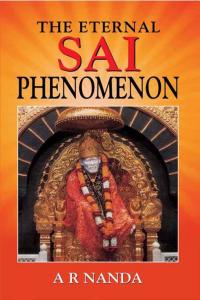 “The Eternal Sai Phenomenon” attempts to unravel the nature of Sai phenomenon primarily in the context of the timeless Shrimad Bhagavad Gita. Sai path has been analysed from the standpoint of various yogas, like Karma yoga, Gnana yoga, hyana yoga and Bhakti yoga. Anecdotes from Shirdi Sai Baba’s life have been narrated to bring home the unique confluence of universal truths of world religions in the teachings and conduct.

Shri Nanda has brought in the eternal nature of the unique phenomenon of Sai linking it to the earlier prophets and Sadgurus. The appearance of Shirdi Sai, the events in His lifetime and after His Mahasamadhi in 1918 have been recorded in the chronological time period with due acknowledgement to the sources. The historical recording starts from 1854 and comes up to year 2009. Arrangement of selected events year-wise is expected to familiarise the readers to the unfolding of Sai phenonomenon in an orderly historical perspective.

This book could serve as a reference document for Sai devotees, researchers and students of spiritual themes, who wish to explore further the nature of Sai Phenomenon and Sai Consciousness.

About the Author : Amulya Ratna Nanda was born in Odisha, did his post-graduate study in Allahabad and U.K. and worked as a member of Indian Administrative Service from 1965 to 2002. During his service career, he worked with State Government of Odisha and Government of India where he held important positions of Registrar General and Census Commissioner of India and Secretary, Ministry of Health and Family Welfare. Since his retirement from IAS he held the position of Executive Director of Population Foundation of India till 2010. His inner search for peace and spiritualism took him to Shirdi Sai Baba and since 1990 he has been reading books and writings on Sai Baba. He started writing on Sai Baba and spiritualism from 2003, and some of these came out in Sai journals. He lives in New Delhi since 1997.