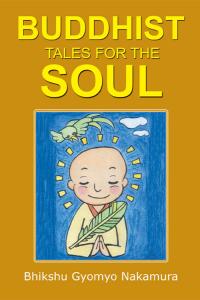 BUDDHIST TALES FOR THE SOUL

Buddhist Tales for the Soul is a collection of stories inspired from the life of the author blending real-life experiences with touches of fantasy. The stories are set in different time frames and are from various parts of
the world like India, Japan and Tibet. It offers glimpses of everyday life, mingling the modern with the ancient, the material with the spiritual and the human with the divine. In this book animals enjoy a place of honour
along with the humans as equally capable of attaining enlightenment. Themes such as karma, dharma, compassion, non-violence, reincarnation and moderation which are central to Buddhism are rendered in a simple
and amusing manner that would appeal to people of all ages looking for illuminating stories set in everyday life.

Bhikshu Gyomyo Nakamura born in Tokyo, Japan in 1954. He came to India in 1975 and has been living in India since then. In India, he has travelled to various places. In 1976, he went to Rajgir, where Buddha preached the dharma, and got inspired to become a Buddhist monk. He practised Tibetan Buddhism in Dharamsala and Theravada Buddhism in Sri Lanka as well as Japanese Buddhism. He has travelled all over the world spreading the message of peace through Buddhism. He has established many Buddhist temples like the Ladakh Shanti Stupa in Ladakh, World Buddhist Centre in New Delhi and Meditation Hut in Kyoto, Japan.

Jeffrey Kotyk (translator) born in Canada in 1985, he was raised in the city of Winnipeg. He studied Japanese and Chinese at the University of Alberta and Japan’s Kokugakuin University before graduating with a BA degree in 2009. Upon graduating he returned to Japan to pursue MA degree in Buddhist Studies at Komazawa University in Tokyo. He is a lay practitioner of Buddhism.

Hae Hanazawa (illustrator) born in Japan in 1987. She has travelled around Asia and has an interest in Yoga and Buddhism. She met Guruji Gyomyo in India and discovered her capability for illustrating his stories which inspire her spiritual emotions. She is a devotee of Buddhism.