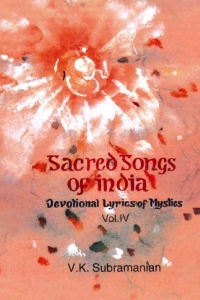 THE SACRED SONGS OF INDIA VOLUME FOUR, like its predecessor volumes one, two and three, encompasses selections from the lifework often mystic poet-saints of India.

The mystic poet-sages included in this volume lived between the 8th and 20th centuries and came from such diverse regions of India like Kashmir, Kerala, Bengal, Tamil Nadu, Karnataka, Maharashtra,
Punjab and Andhra Pradesh.

They are: Sundarar (also known as Sundaramurthy), one of the great Nayanmars, Nam ma/war, the Doyen of Alwars, Basavanna, the Founder of Veerasaivism—a movement pledged to an egalitarian society devoted to
God, Lad Ded or Lalla Yageswari, the Kashmiri Saivite Yogin, Bilwa Mangal immortalised by his poem Krishnakarnamritam, Chandidas, the Vaishnavite Rebel of Bengal who spearheaded the Sahwja movement of Bhakti, Guru Nanak, the Founder of Sikhism, Eknalh, the Maharashtra saint, Kshetrajna, the Telugu
composer whose sensual images sought to seek spiritual uplift and Suddhananda Bharati, the mystic Yogi, who poured out his heartfelt love for God in mellifluous poetry.

The sang in different languages: Kashmiri, Kannada, Sanskrit, Punjabi, Telugu, Marathi, Bengali and Tamil. But all of them sang of the glory of God, with whom each had an intimate, spiritual communion.

This precious spiritual legacy bequeathed by the mystics of India will be a perennial source of inspiration for all scholars of Indology and a limitless repertoire for all artistes in the fields of music, dance, drama and ballet.