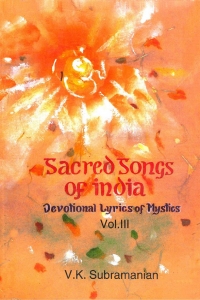 THE SACRED SONGS OF INDIA VOLUME THREE, like the earlier volumes one and two, encompasses selections from the lifework often mystic poet-saint-musicians of India, spanning several centuries.

These poet-sages came from different regions of India, lived in different periods of India’s chequered history, and sang in different languages. But they were all mystics, who sought and attained direct communication with God as the intangible, omniscient, omnipresent Power or in diverse manifestations of Divinity in personalised forms celebrated in the myths and legends of India and sanctified in the many
temples located in various parts of India and which, as pilgrim centres, draw millions who throng to pray in love and devotion to God.

Namdev sang in Marathi, Chaitanya in Bengali, Kanakadasa in Kannada, Raidas in Hindi, Narayana Teertha and Sadasiva Brahmendra in Sanskrit, Bhadrachala Ramadas and Pattanam Subramania Iyer in Telugu, and Arunagirinathar and Gopalakrishna Bharati in Tamil. Their diverse God-oriented musical compositions in different languages and belonging to different periods of history are presented on a common platter,
in a common language to be savoured and sung, choreographed and danced, and treasured as a precious spiritual legacy by people all over the world, irrespective of their religion, race, language or nationality.

The spiritual experience conveyed by these sacred songs of India merits admiration, appreciation and emulation.

The book, like the earlier two volumes, will be an invaluable repertoire for all performing
artistes in the fields of music, dance, drama and ballet.

Scholars of Indology will find it a precious reference source.