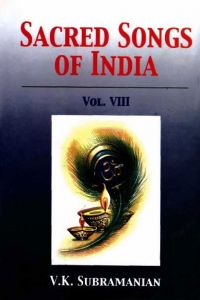 THE SACRED SONGS OF INDIA VOLUME EIGHT, like its predecessor volumes, encompasses selections from the life work of ten mystic poet-saints of India.

The mystic poet-sages included in this volume lived between the 3rd century and the 20th century A.D. and came from such diverse regions of India as Tamil Nadu, Madhya Pradesh, Kerala, Kamataka, Punjab, Uttar Pradesh and Orissa.

They are: Tirumoolar, the Doyen of Saivite saints of Tamil Nadu, Kalidasa, the National poet of India, who hailed from Ujjain, Kulasekhara Perumal, the King of Kerala who chose the spiritual path in preference to military adventures, Kamban, the undisputed Emperor of Tamil poets, whose Tamil rendering of the Ramayana is an incomparable classic, Devara Dasimayya, the poineer of Veerasaivism from Karnataka, Guru Ramdas, the fourth Sikh Guru, Rahim, the Pathan poet who was smitten with love for Krishna, the darling of the Gopis, Appayya Dikshitar, the Saivite poet-philosopher of Tamil Nadu, Bhima Bhoi, the blind tribal mystic of Orissa who yearned for God, the invisible, elusive One and Sri Narayana Guru, the saint from Kerala who was also a great social reformer.

They sang in different languages: Tamil. Sanskrit, Kannada, Punjabi, Hindi (Brajbhasha), Oriya and Malayalam. But all of them sang of the glory of God, for whom they yearned, pouring out their devotion in inimitable immortal poetry.

Like its predecessor volumes, Sacred Songs of India, Volume Eight, will be a valuable repertoire for all artistes in the field of music, dance, drama and ballet and a priceless source of reference for scholars of India's spiritual history.