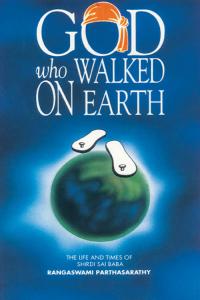 GOD who Walked on Earth: The life and the Times of Shirdi Sai Baba

Who was Sai Baba? Where did he come from and what was his message? How and why was he worshipped as a God? Who were his disciples and why were they attracted to him? What do his devotees, numbering millions all over the country, think of his lilas? Have they experienced his compassion, and received succour and relief in their hour of need?

These questions are answered in this biography of a living God who charmed and captured the hearts of people from all walks of life, of all religions, rich and poor, the learned and the illiterate. Many books have been written about Sai Baba of Shirdi but this one is different. For the first time a comprehensive and objective account of the life and times of Sai Baba is given in simple and easy to-understand language without omitting any aspect of Baba’s life and his philosophy.

The book presents an absorbing story of a man who came to Shirdi as a fakir, was teased by children and frowned upon by sceptical villagers and remained to reign as a spiritual leader, the greatest saint of all times. He became a god who walked on earth. It is a book which every Sai devotee would like to possess as a Bible of Baba’s teachings and a remembrance of the great Master whose idol or portrait adorns the prayer rooms of millions of homes throughtout the country.

Rangaswami Parthasarathy, a journalist, retired as a Senior Assistant Editor of the Hindu, after serving the newspaper for 32 years. He wrote the history of the Hindu titled Hundred Years of the Hindu which was released during the centenary celebrations of the paper in 1978. He subsequently wrote Memoirs of a News Editor describing his experiences as a News Editor for the Hindu for over 12 years. He has also written three more books on journalism, Basic Journalism, Journalism in India and Here is the News: Reporting for the Media. Apostle of Love, Saint Saipadananda, which he wrote in 1981, is a biography of Sri Radhakrishna Swamiji, his guru, and a great devotee
of Sai Baba of Shirdi and a disciple of Sri Narasimha Swamiji. Parthasarathy has been the recipient of the N. Raghunatha Aiyer Memorial Award for Excellence in Journalism.