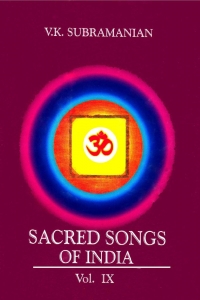 THE SACRED SONGS OF INDIA VOLUME NINE, like its predecessor volumes, encompasses selections from the life work of ten mystic poet-saint-musicians of India.

The poet-saint-musicians included in this volume lived between the 5th century and the 20th century A.D. and came from such diverse regions as Tamil Nadu, Maharashtra, Assam, Punjab and Bengal.

They are: Karaikkal Ammaiyar, famous woman-saint of Tamil Nadu, Pattinattar, the Saivite'saint, also from Tamil Nadu, who turned from a wealthy trader to a recluse, Vedanta Desikan, the famous Vaishnavite poet saint, who passionately spread the teachings of Ramanuja, Jana Bai, the Maharashtra woman saint, who though a servant-maid of Namdev attained highest spiritual advancement, feeling God in every fibre of her being, Sankaradeva, the Vaishnavite saint reformer of Assam who rejuvenated the life of Assam with his Vedantic Vaishnavism, Guru Tegh Bahadur, -the ninth Guru of the Sikhs who became a martyr to save the religious faiths of India, Bulleh Shah, the mystic Sufi saint whose songs conveyed the message of pure Vedanta, Abhirama Bhattar, the God-intoxicated temple priest who saw his beloved goddess, Abhirami, everywhere, Swami Vivekananda, the passionate social reformer who was also a religious mystic and poet, and Harikesanallur Muthiah Bhagavatar, the outstanding music composer, who continued the tradition of the Carnatic music Trinity: Tyagaraja, Muttuswami Dikshitar and Syama Sastri.

They sang in different languages: Tamil, Sanskrit, Marathi, Assamese, Punjabi and Bengali. But all of them sang of the glory of God.

Sacred Songs of India, Volume Nine, will be a valuable repertoire for all artistes and a useful reference source for Indological scholars.