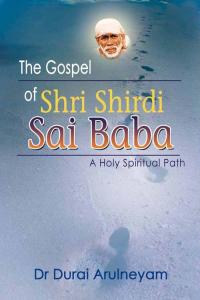 God is One and belongs to All

The Gospel of Shri Shirdi Sai Baba : A Holy Spiritual Path is a bold attempt to bring out a multi-religious holy version in this twenty-first century, on the lines of Bhagwad Gita, Holy Quran and the Holy Bible. This book is unique in framing a spiritual path for people all over the world. In each chapter, the spiritual meanings have been correlated with scientific explanations. The readers cannot escape the shower of blessings of Shri Shirdi Sai Baba. The amateur readers who are yet to taste the bliss of divinity would be entering in the kingdom of God through this holy version. Shirdi Sai Baba embraced all religious and the downtrodden. His life and ideology will suit today's people and remove all incongruities. So, the initiation (pillayar suli) of forming Shirdi Sai Yuga (Era) has started in this book. It is now up to the future generation to lay the road and proceed further. This holy version proves the existence of the Supreme Power in the name of Shri Shirdi Sai Baba, which gives real life and new flavour to earlier spiritual versions.

He obtained his Masters in Environmental Engineering in 1994 from Annamalai University, Chidambaram. Later, he received his Doctorate in Environmental Biotechnology in 2000 from Indian Institute of Technology, Chennai. He worked as research scientist in Pohang University of Science and Technology, South Korea. Presently he is working as an Environmental Consultant in Middle East.