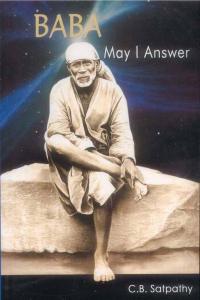 Baba: May I Answer

The spread of the name and fame of Shri Sai Baba of Shirdi within the last two decades is a phenomenon by itself. From 1999 onwards a number of websites were created in the name of Baba, the world over.

In the year 2000, Shri C.B Satpathy visited Chicago to inaugurate the Sai Utsav in the month of November. This event attracted a lot of devotees from all over the world including hundreds of families from the US, Latin America, Canada and UK, and by Baba's grace acted as the seed of the creation of an effective world forum of Sai devotees. It was followed by similar events and confrences in Sydney, Australia in 2001, Johannesburg and Nairobi in Africa in 2003 where an increasing number of devotees asked me questions regarding Sai Baba and his message. This trend continued over the years through the internet, till he decided to come up with a publication that would lend greater clarity about His message to His devotees as well as to those with a religious bent of mind.

This book is a compilation of the questions he has received over the years, and answers to them in a structyred manner in a style and language which is easy to understand. His messages circulated on various festivals between 2004 and 2009 through diffrent magazines and websites are also included.

Shri C.B Satpathy was drawn to Shri Sai Baba of Shirdi in the year 1989. Ever since then, he has been working untiringly to propagate the values which Shirdi Sai Baba the faquir stood for. Having inspired the construction of about 200 temples in India and abroad and nurtured them, he also has authored and encouraged others to publish a number of books and magazines/journals on Baba in English, Hindi, Oriya and other Indian languages.

Shri Satapathy retired as Director General of Police from U.P and is fully devoted to cause of Sai Baba.