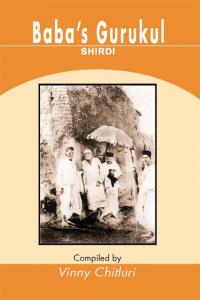 This book begins from the small village Shiladhi, where a young fakir clad in white arrived with a marriage party. He stayed on and his divine powers were slowly recognized by the laity around him. Slowly the dilapidated  Mashid mayee gets transformed into Dwarka Mai lit up by the warm Dhuni Mai and the ever burning lamps. Vehement skeptics and devotees flock alike to Shirdi, as the Kul-adhipati Sai Baba gathers them in his Gurukul. The book describes in details the various well known miracles of Baba and illustrates their meaning in a lucid manner. The author brings a rear insight and an almost personal touch to this book as she describes the various articles used by Him and the places He visited regularly.
This book came about by this irresistible urge to share Shirdi, so readers can profit from it. The articles used and handled by Baba are with the Sansthan so the readers can see them and gain insight in their significance.
Vinny Chithuri was born in Arvankadu (Nilgiris), but was educated in Jabalpur (Madhya Pradesh).She did her postgraduation in Pediatrics from Kalawati Saren Hospital,Delhi.Then she went to US,passed the board examination and was conferred the 'Diplomat of the American Academy of Pediatrics.'
While in the US,she started thinking seriously about her Karmic bonds with her family. As her father worshipped Baba,She was also able to do the same from a very young age.She has been worshipping Baba for sixty years.Her relationship with Baba is thst of a 'best friend' as He loves her no matter what she does.
She retired from the medical profession at the age of fifty and came to Shirdi in 1994 and settled there. Then she set about trying to know more about Baba. She soon realised about trying to know more about Baba.She soon realised that 'the more she learned about Him, the more ignorant she was'. Alas! it would take her many lives to know a little about this inscrutable God. But her quest is ongoing.