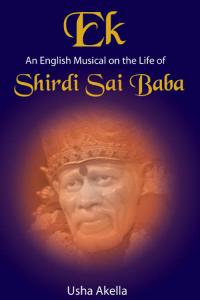 Ek An English Musical on the life of: SHIRDI SAI BABA

In the present age of consumerism, people often look for quick gains and shortcuts to success. Amidst the cacophony of such supposedly wish-fulfilling claims, the need for a genuine guide, a true guru, is often felt by those who are able to look beyond the facade of oratorial brilliance. The Sai of Shirdi has been one such authentic presence whose voice has healed the injured, guided those who had lost the way, and brought back hope to those who had lost everything.

Though he led a simple life, what is known for certain is that he was deeply soaked in the Sufi tradition and was knowledgeable of the Vedanta. Like Kabir, his universalism, tolerance and presence transcended the religious boundaries of both Hinduism and Islam. The significance of Baba is embodied not in his identity but in the impact his presence had on millions of devotees and still continues to have, though he may not be with us physically. The inspiration behind this English musical, on the life and teachings of Sai, was to convey the message of this enigmatic saint to a younger English-speaking audience.

Usha Akella is a dedicated Sai devotee. She regularly visits Sai temple, watches the Sai serial and is fascinated with the literature on Sai. Her musical, the first of its kind, encapsulates the life and message of Sai Baba. The Writing of EK has been a sadhana for her, which flowed with ease and required the barest editing.

Usha Akella is also the author of two books of poetry and has read for the Sahitya Akademi. Her literary creations are included in the upcoming Harper Collins anthology of Indian English poets. She has represented India at many international poetry festivals held in Macedonia, Slovenia, Mexico, India, Turkey, Colombia, Nicaragua, etc. She edits a yearly feature on Diaspora Literature for www. museindia.com. Her work has been published in journals in India, USA, Europe and Australia.