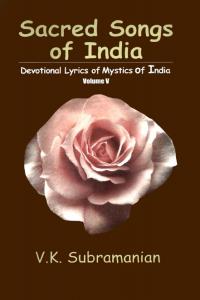 THE SACRED SONGS OF INDIA VOLUME FIVE, like its four predecessor volumes, encompasses selections from the lifework of then mystic poet-saints of India.

The mystic poet-sages included in this volume lived between 7th and 19th century and came from such diverse regions of India as Tamil Nadu, Karnataka, Madhya Pradesh, Rajasthan, Kerala, Punjab, Maharashtra and Bengal.

They sang in different languages: Tamil, Kannada, Sanskrit, Hindi, Malayalam, Punjabi, Marathi and Bengali. But all of them sang of the glory of God, with whom each had an intense spiritual communion.

This precious spiritual legacy bequeathed by the mystics of India will be a perennial source of inspiration for all scholars of Indology and a limitless repertoire for the artists in the fields of music, dance, drama and ballet.