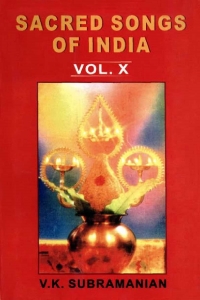 THE SACRED SONGS OF INDIA VOLUME TEN, the concluding volume, in the tenvolume series compendium of devotional lyrics of the mystic poet-saint-musicians of India comprises selections from the following:
Ilango Adikal, the famed author of Silappadikafam, who probably lived in the 2nd century A.D., Ramanuja, the Vaishnavite saint who lived in the 11th century A.D., and preached the devotional philosophy of Visishta Advaita, Prativadi Bhayankara Acharya, the little known author of the famous prayer, Venkatesa Suprabhatam, recited daily at the Tirupati temple, Tunjat Exhuttacchan, the wellknown
poet saint of Kerala, who wrote the Adyatma Ramayana, Tayumanavar, the Saivite saint who lived in the 18th century, as also Arunachala Kavi Rayar, the composer of the Tamil opera Rama Nataka Kirtanas, who also lived in the 18th century, Muthu Tandavar, the Saivite saint, one of the Tamil Trinity, also of
the 18th century, Ramalinga Swamigal, also known as Vallalar, the mystic social reformer who worshipped God as Effulgent light and preached universal compassion, who lived in the 19th century, Nilakantha Sivan, mystic music composer from Kerala, who also lived in the 19th century and Mysore Vasudevachar from Karnataka, of the 20th century, whose mellifluous devotional musical compositions
made Rabindranath Tagore confer the title Sangita Kala Kovida on him.

Like the previous volumes, this concluding volume will prove an invaluable repertoire for all artistes in the fields of music, dance, drama and ballet.